Sherwood Forest Hospitals NHS Foundation Trust have worked with Nottinghamshire Carers Association (NCA) to become a Carer Friendly Employer.  In Carers Week, they launched their Carers Passport which will help Carers and their managers and supervisors to hold positive conversations when support is needed at work.  Tracy is an NCA trained Carers Champion and her story demonstrates how, with just a few adjustments and signposting, she has been able to get the right support to help her in her caring role, but also to remain in work.  Thank you to Tracy for sharing her story. 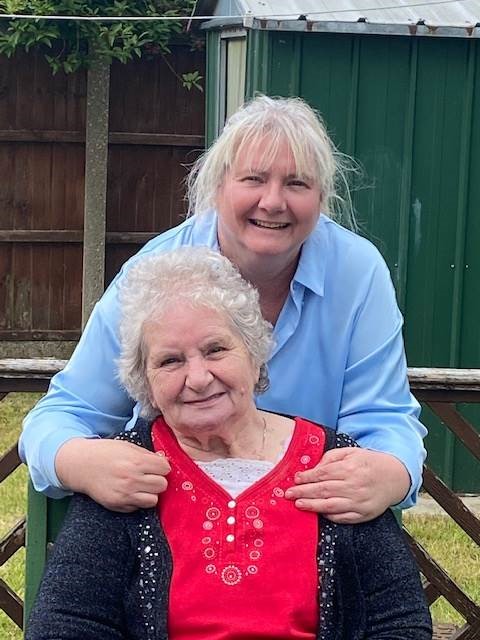 My caring role started after my Dad passed away over 3 years ago. My Parents looked after each other and supported each other’s needs. It wasn’t until I started this caring role for Mum that I began to see her Dementia and how it really was as Dad had kept this private between the two of them. We got a formal diagnosis of this shortly after Dad passing. There seemed to be a lot to sort out as they did a lot between them both.  As Dad was a coal miner, we came across a company called CISWO which is a coal mining charity and a lady called Helen O’Hare who has been outstanding. They are amazing and offered us so much support, from financial support in knowing what benefits Mum could claim, to a contribution towards Dad’s funeral. They have been supportive offering emotional support but also support us with completing forms, to get the right benefits or obtaining a blue badge for the car and knowing what support is out there.  It’s a comfort knowing I can phone them at any time. Having this support has been invaluable as it has meant I can focus on Mum, having quality time with her without the stress and worry of these formalities & details.

Being a carer and working is a hard balance, trying to balance everything with needing flexibility often at last minute. Work have been really supportive and allowed me to work flexible. My line manager in particular is really supportive, compassionate and understanding, and as a line manager myself I want to offer the same to my team. Knowing what support is out there, being able to signpost is helpful, and having open and honest conversations is really key. The Trust is launching the Carers Passport for staff too, this is about having this open conversation and talking through with your manager the type of support you may need. With this and the launch of the champions there is support there for you. Sometimes it is the small things that help the most, having compassionate conversations to confide openly with your manager or a champion, and just to know that you are not on your own.

I was also signposted to Nottingham County Council to register there as my mum’s carer as this opens other doors for support and guidance. I won’t lie I opted for the telephone conversation for an assessment as this form was huge and it took around 40 minutes but from that call I have now in place so many hours of respite, I was issued with a card to carry in case of any emergency so if I was taken into hospital the emergency care line would be contacted so that my mum wasn’t left alone.  They also pointed me in the direction of various other organisations such as Dementia UK and Notts Carers Hub.  The Notts Carer Hub send out monthly emails offering numerous classes or groups that you can join for different things.  Also if you live in the Derbyshire area they do have the same set up.

The hub also advised me to register at my mum’s GP Practice and it was set up that all communication came via myself and no further telephone calls to mum as she could never remember what was said with the kind of dementia my mum has.  I have since found out that most GP Practices have a carers champion to support carers.